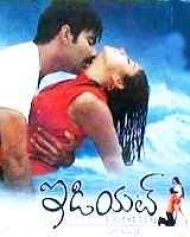 Romance
Release Date : 22 Aug 2002
Cast : Ravi Teja, Rakshita
Director : Puri Jagannadh
Synopsis
Idiot is a romantic movie movie in which, Chanti (Ravi Teja) is the son of a head constable (Kota). Chanti is a guy with carefree attitude. He is beaten by a rival gang at college and was rescued by a beautiful girl (Rakshita). She pays his hospital bills and donates her blood. She is gone from the hospital by the time Chanti became conscious. Chanti starts loving her for her good-heartedness though he did not see her. That girl's name is Suchitra. She later turns out to be the daughter of the city police commissioner Vipra Narayana (Prakash Raj).

The fun starts now with how Chanti falls in love with Suchitra and gives sleepless nights to Vipra Narayana.