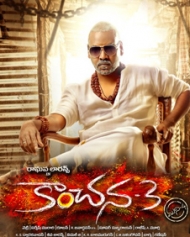 Kanchana 3 is a bilingual movie simultaneously made in Tamil and Telugu and it is a romantic comedy horror directed by Raghava Lawrence and produced by Raghavendra Productions banner while S. Thaman scored music for this movie

Raghava Lawrence, Oviya and Vedhika are played the main lead roles along with Kovai Sarala, Kabir Duhan Singh, Manobala, Sriman, Devadarshini, Sathyaraj, Kishore and many others are seen in supporting roles in this movie.

Kanchana 3's plot surround a youngster named Raghava, who is afraid of ghosts and spirits. Things take a sharp turn, when he gets possesed by a spirit, who is seeking revenge against someone.