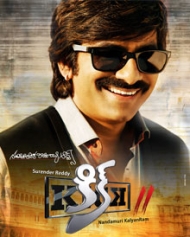 The film was officially launched on August 20, 2014 and the principal photography began on the same day. Audio of the movie is scheduled to release on May 9, 2015. The film is scheduled for a worldwide release on Aug 21, 2015.

Kick 2 is a sequel of the 2009 blockbuster Telugu film Kick, which is also directed by Surender Reddy.

Kick 2 maintained the basic essence of its prequel but has a taken a different route in the lead character's portrayal. While it's all about Kick in the previous version, now you got to meet a person who put his comfort on the top.

Where did his obsession for comfort take him? What role does Vilaspur village and its people play in his life? Did he stand for his comfort through out? This forms the crux of the story.