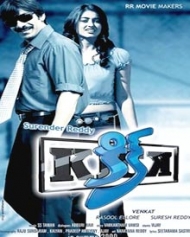 Nayana (Ileana) is a chivalrous girl. She comes across Kalyan (Ravi Teja), a typical boy, who always looks for a kick in everything. He doesn't want to happen something as it is and he looks for a kick for achieving something. He could not work in any particular job for long as he feels that the kick is missing after working for some months or days.

Nayana's sister (Ashika) tells her that she is in love with Kalyan. As Nayana knows very well about...