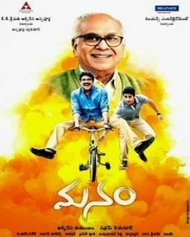 Manam is an romantic comedy entertainer movie directed by Vikram Kumar. The film stars the late Nageswara Rao, Nagarjuna and Naga Chaitanya along with Shriya Saran and Samantha. Bollywood superstar Amitabh Bachchan done a Special appearance in this movie.

Entire movie deals from the year 1920 to 2013 and this is the last movie of Nageswara Rao. 'Manam' is a story filled with joy and rejoicing in reuniting with the lost ones.

Watch out for that similarities in the behaviour of the two Nagarjunas. When he is wooing his beloved one, one time as a man still a child at heart and the second time as a rich bachelor savouring his moments with his chosen girl, he self-forgetfully loses his social identity to become an individual showing nothing but unconditional love.

It's not wise to compare the performance of Nag and the legendary actor, Late ANR, but somehow the film seems like a Nag film. That fabulous scene in which he expresses a pleasant surprise at having seen his 'father' inside the plane. That fabulous scene in which he becomes nervous when he finds his 'mother', not knowing that he is holding in his hands a book by name 'The world's greatest mom'.

ANR is seen in a one-of-its-kind role. He is full of josh and, like Nag, exudes that child-like rapture at seeing his beloved ones. On the flip side, his role is shorter than one would have expected.

Naga Chaitanya is relatively seen in more number of scenes and he does that rom-com act and everything with ease. He strikes a good chemistry with Samantha, yet again. Samantha, too, has got many scenes and she gets her emotional act right.

But it is her scenes with Nag which are truly fun to watch; she is such a natural in her scenes with Nag. Shreya proves her mettle yet again. Watch her when she says to Nag about impending marriage with some important person who found her lovable.

All the main characters have a meaningful place in the story. The climax gives that surreal feel.

The offical theatrical trailer released on April 8, 2014 on the eve of Sri Rama Navami.