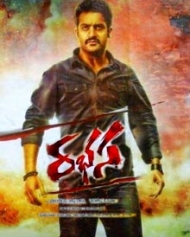 Rabhasa is a action entertainer movie in which Jr Ntr playing the main lead role along with Samantha and Pranitha are in female leads.

Kandireega fame Santosh Srinivas will be directing this movie under Bellamkonda Suresh's Sri Lakshmi Narasimha Productions banner. Thaman S scoring music for this movie. The First Posters and Photos released in net on May 19th in eve of Jr NTR's Birthday.