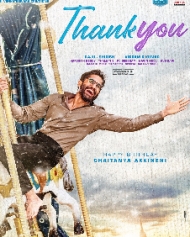 Thank You is a romantic entertainer movie directed by Vikram Kumar. The movie casts Naga Chaitanya, Raashi Khanna, Malavika Nair, and Avika Gor in the lead roles along with Sai Sushanth Reddy, Prakash Raj, and many others seen in supporting roles. The music was composed by Thaman S while cinematography is done by P. C. Sreeram and edited by Naveen Nooli. The film is produced by Dil Raju under Sri Venkateswara Creations banner.
Story
Abhiram is a hockey player from a poor family who grew up in his mother's love. Abhi's father's dream was to play for the national hockey team. But due to some circumstances, he left hockey and became a software engineer, created an app called Vaidya, and became a billionaire in America. He cohabits with Priya, who is responsible for his growth. When he proposes marriage in this order. Priya rejects Abhiram's proposal which he could not able to digest the rejection.
Why did Abhiram, who dreamed of playing for the national hockey team, leave the game? Abhiram had to leave his father's dream in the middle. How does Abhiram cause the death of the consultant Rao (Prakash Raj) who sheltered him in America? Why did Priya reject Abhiram's marriage proposal? What will happen to Abhiram after Priya leaves? What role did Parvati (Malavika Nair) and Chinnu (Avika Gor) play in his life? Why did Parvati sacrifice her love for Abhiram? What motivation did Chinnu give to Abhiram? Why did Abhiram want to thank the people who supported and inspired his life? The story of Thank You movie is the answer to the questions to whom Abhiram thanked in his life.
Release Date
Thank You movie released in theaters on July 22, 2022.