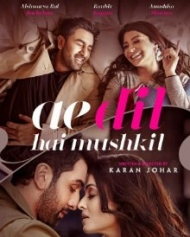 The movie dwells deeply on relationship and heartbreaks. It is for the first time that Aishwarya is sharing screen space with Ranbir Kapoor. Through Ae Dil Hai Mushkil, Karan returning to the director's chair after a gap of three years, his last movie was Student of the Year, which got released in 2012.

Ae Dil Hai Mushkil trailer got postive reviews from audience and critics. Ranbir-Aishwarya's steamy scenes were the main highlight of the trailer.

All the songs of Ae Dil Hai Mushkil entered the hit...