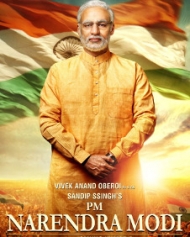 P M Narendra Modi is a Bollywood biopic based on the life of Indian prime minister Narendra Modi. The movie will be directed by Omung Kumar and Sandip Ssingh. The movie star Vivek Oberoi in the titular role. The movie chronicles the journey of an ordinary 'chaiwala' who grows on to become the Prime Minister of India with the love and support of the fellow citizens.

The film initially gives us a glimpse of Modi as an 'adarsh balak' who lends a helping hand to his father in selling chai wearing a jerkin with 'Sabki ki chai, modi ki chai.' A few scenes later, we even see him rebuke the practice of dowry during a theatre act. Highly impressed by Dev Anand's character Raju Guide from the film 'Guide', Modi sets out in search of his true calling and embraces sanyas against his parents' wishes.

Until an ascetic with whom he meditates on the mountain cliff advises him to go back to his people to serve them. He soon joins RSS and sails his way towards the Chief Minister's seat. Be it the accusation of turning his back to the communal riots in his state to admonishing a corrupt minister in his cabinet, the man is every bit of a 'desi superhero'. With every milestone in his career, the man gallops his way towards finally becoming the Prime Minister of the nation.