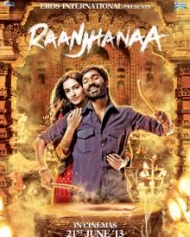 Romance
Release Date : 21 Jun 2013
Cast : Dhanush, Sonam Kapoor
Director : Anand L Rai
Synopsis
Raanjhnaa movie is an intense love story, in which Dhanush plays a role of local Varanasi boy whereas Abhay and Sonam play as Jawaharlal Nehru university colleagues. Their characters would be known to one another for eight years in the script.

Quiet, beautiful with mischievous eyes, Zoya was the girl of his dreams. She was alike a breath of fresh air the first time he saw her on the busy streets, sitting regally in...