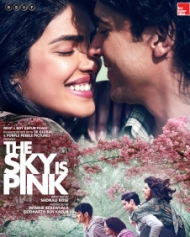 The Sky Is Pink

The Sky Is Pink Story

The Sky Is Pink is a Bollywood biographical-drama, helmed by Shonali Bose. The movie stars Priyanka Chopra, Farhan Akhtar and Zaira Wasim in lead roles. The movie is based on the life of motivational speaker Aisha Chaudhary, who was diagnosed with pulmonary fibrosis (lung disease). The Sky Is Pink is produced by Ronnie Screwvala, Siddharth Roy Kapur and Priyanka Chopra under the banner RSVP Films & Purple Pebble Pictures Pvt.Ltd. and the movie is Distributed by Viacom 18 Motion Pictures and Panorama Studios Pvt.Ltd.

The film begins in Aisha Chaudhary's (Zaira Wasim) perky voiceover where she reveals that she's dead. "Get over it. It's quite cool actually," she tells us before steering the topic towards her parent's sex life- Aditi Chaudhary (Priyanka Chopra) and Niren Chaudhary (Farhan Akhtar). She fondly calls them, her 'Moose' and 'Panda'.

In a non-linear style of story-telling, the narration jumps from one timeline to another revealing Aditi-Niren's love story, how Aisha was born with Severe combined immunodeficiency (SCID) due to a faulty gene in her parents. ('Baad mein google kar lena, Aisha cheekily tells us while disclosing the cause of her short lifespan) In a tragic turn of events, the Chaudharys had previously lost their firstborn Tanya to the same disorder. However, their son Ishaan (later played by Rohit Saraf) miraculously isn't affected by this life-threatening disease.

Determined to save Aisha's life, the middle-class couple travels to London where they try to raise funds for her treatment. At one point, their marriage even culminates into a long-distance relationship where Aditi and Aisha live in London for the latter's treatment whereas, Niren and Ishaan return back to their house in Delhi. After a successful bone marrow transplant, Aisha recovers fully and the Chaudharys return back to India.

But like they say, all good things come to an end. Aisha develops pulmonary fibrosis as a side-effect of her chemotherapy, in her teenage years. Unfortunately this time, her days are counted. Meanwhile, Niren and Aditi try every trick in the book to save their child from the clutches of death.

The movie has its music composed by Pritam. Iordan Borissov has wielded the camera for The Sky Is Pink. As per the latest reports, the movie will hit the big screens on February 22, 2019.

The Sky Is Pink Cast

The Sky Is Pink Crew

The Sky Is Pink Critics Review

The Sky Is Pink Movie Photos

The Sky Is Pink Movie Trailer

The Sky Is Pink Movie Songs

The Sky Is Pink Movie News