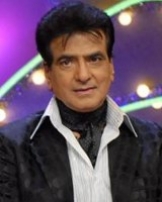 Early life
Jeetendra was born Ravi Kapoor in Amritsar, Punjab in 1942 to a Punjabi family. Ravi Kapoor was born in a business family that dealt with imitation jewellery. While supplying jewellery to V. Shantaram, he was cast as Sandhya's double in the 1959 movie "Navrang."

Career
He started in Bollywood in the late 1950s when filmmaker V. Shantaram gave him a chance as actress Sandhya's double in Navrang (1959), but got his first big break when Shantaram cast him as hero in Geet Gaya Pattharon Ne (1964). Since then, he has appeared in almost 200 films.

Jitendra came into the spotlight in 1967 with Ravikant Nagaich's Farz, which went on to become a golden jubilee success. The tee shirt and white shoes he picked up from a retail store for the "Mast Baharon Ka Main Aashiq" number in Farz (sung by legendary Singer Mohd Rafi) became his trademark. His vigorous dancing in films like Farz, and Banphool won him the epithet of the Jumping Jack.

In the 1980s, Jitendra was frequently paired up with Sridevi or Jayapradha for remakes of South Indian potboilers courtesy of Rama Rao Tatineni, K. Bapayya and K. Raghavendra Rao; some of these films were produced by Padmalaya Productions. Featuring elaborate sequences with colorful clay pots, dozens of extras, electronic music by Bappi Lahiri, and lyrics by Indeewar , movies like Justice Chaudhry (1982), Mawaali (1983), Himmatwala (1983), Jaani Dost, and Tohfa (1984) were huge hits despite low critical acclaim.

He recently made an appearance in a popular TV serial Kyunki Saas Bhi Kabhi Bahu Thi as an old man. He was a judge of Jhalak Dikhla Jaa, an Indian dance competition on Sony Entertainment Television.

Personal life
Born in Punjab, Jeetendra spent his childhood in Girgaum, Mumbai. He used to live in Ramachandra Building in a middle class locality. He still cherishes his memories there and visits the place during Ganapati festival every year. In her authorized biography, Hema Malini claimed that they almost got married, but she backed out. He then married his childhood sweetheart Shobha Kapoor, and has a son who is also an actor, Tusshar Kapoor and a daughter, Ekta Kapoor, who runs Balaji Telefilms. They make popular TV serials in Hindi, Tamil, and other languages. They have also produced five Bollywood films, two of which have Tusshar in the leading role. Jeetendra made a brief appearance in one of his daughter's produced films Kucch To Hai (2002) where he appeared alongside his son Tusshar.