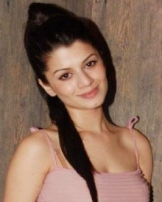 Kainaat Arora is an Indian model turned actress who is making her Debut in Bollywood comedy film, Grand Masti. She is the cousin of late actress Divya Bharti. Kainaat has also done special appearances and item songs in Mankatha and Khatta Meetha. She appeared in a Malayalam film song and is going to be seen in an item song of Hate Story 2.

Kainaat is from Saharanpur Uttar Pradesh , India and she has completed her studies in merchandising at the National Institute of Fashion Technology in New Delhi. She is the cousin of famous actress Divya Bharti

She made her debut to bollywood with an item number "Aila Re Aila" beside Akshay Kumar in Khatta Meetha, she also appeared in south indain movie with Ajith Kumar's comedy thriller movie Mankatha. In her latest movie Grand Masti, she played a role as Marlo, her upcoming movies are Hate Story 2 and she bagged an special role in John Abraham's Welcome Back movie.