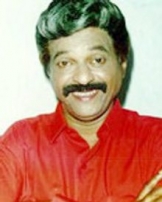 Pappu or Kuthiravattam Pappu was a popular theatre artist and Malayalam comedian actor. He could mark his presence in the industry by unique style and use of the Kozhikodan dialect.

Early life
Pappu was born as Padmadalashan in Feroke in Kozhikode, Kerala and was the only son of Panagodu Raman and Devi. The family shifted to the village of Kuthiravattam (Half a kilometre from Govindapuram), Kozhikode when Pappu was still a child. He was keen in acting since childhood and did the first major stage performance when he was 17. At that time he was studying in Kozhikode St. Antony's School.

Career
Pappu started his career as a drama artist. He acted in about 1000 instant plays and 2 professional dramas, Samasya and Manasu. His role in the drama 'Samasya' fetched him the Best Comedian Award. Pappu has worked with Kunjandi, Nellikode bhaskaran, Thikkodiyan and K.T. Muhammed. Film personalities, Ramu Karyat and Vincent were impressed by his performance in Mudiyanaya Puthran and gave him chance to act in the film Moodupadam. His first noted role was in Bhargavi Nilayam, written by Vaikom Muhammed Basheer and directed by A. Vincent. The name of his character in the film, Kuthiravattam Pappu stayed with him for the rest of his life. His performance in Aalkkottathil Thaniye, Etho Oru Theeram, Kanakkinavukal was remarkable. The turning point in his career was his roles in Chembarathi, Avalude Ravukal, Angaadi. Even his brief roles like those in Manichitrathazhu and The King are well remembered till this day. His one-liners like "Taski Viliyeda" in Thenmavin Kambath and "Ippo Sariyakkitharam" & "'Thamaraseri Churam'" in Vellanakalude Naadu earned their position in the list of Malayalam idioms. Kuthiravattom pappu became one of the best comedians Malayalam cinema has ever produced. He used Kozhikode slang in his acting which was liked and appreciated. Due to his affection towards plays, with the help of his old friends in the field of theatre, he had founded a theatre named "Akshara Theatres" a few weeks before his death.

He passed away in a private hospital in Kozhikode following a cardiac arrest on 25 February 2000. He had acted in over 1000 films. Narasimham was his last film released.