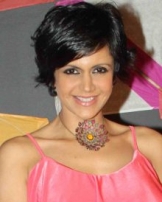 Mandira Bedi is an Indian actress, fashion designer, and television presenter who gained celebrity status playing the title role in the 1994 television serial, Shanti, shown on India's national channel, Doordarshan, which was the first ever daily soap on Indian television.

Mandira Bedi was born in a Punjabi-speaking Bombay-based Bedi family on April 15, 1972. She did her schooling from the Cathedral & John Connon High School.

Barely had she started working at Oglivy & Mather Advertising Agency, when she was offered to play a role on the small screen in Shanti. This led her to sign up for 'Kyun Ki Saas Bhi Kabhi Bahoo Thee' also.

An Aries, she is passionate about live cricket and was thrilled when Sony Television offered her to compère 'Extra Innnings'. Her appearance in a wide array of designer sarees glamorized the drab male-dominated cricket world which eventually led to a rise in viewership. Cricket-obsessed viewers in India, Pakistan, Bangladesh and other countries, both male and female, were enchanted with this svelte, fresh-faced, sexy, saree-clad, and wholesome Indian girl.

Fashion designer, Satya Paul, designed cricket-themed sarees, which included one with signatures of cricketers; another one with cricket newspaper headlines; one with animations of players; one with mini flags of cricket participating nations, which are just a few out of the 50 odd ones.

She has acted in her hubby's movie 'Shaadi Ka Ladoo' and also in 'Dus Kahaniyan'. She likes doing a variety of screen roles, but prefers glamorized dramas. She would love to do negative roles, like the one in 'Kyun Ki Saas Bhi Kabhi Bahu Thee', but is told that she does not have a face for it. She has appeared in 'Fame Gurukool'; she is the anchor of Set Max's World Cup Cricket 2007, a sitcom 'Papa Ban Gaya Hero', amongst others.