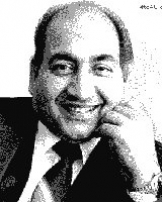 Mohammed Rafi (Hindi: मोहम्मद रफ़ी, Urdu: محمد رفیع; December 24, 1924 – July 31, 1980), often addressed as Rafi Saahab, was an Indian playback singer whose career spanned four decades. A versatile singer, Rafi sang in many Indian languages including Hindi, Urdu, Bhojpuri, Punjabi, Bengali, Marathi, Kannada and Telugu. He also recorded English and Persian songs. He is primarily remembered, however, for his Hindi-Urdu songs, which still remain very popular in the Indian subcontinent and also among the Indian diaspora. Along with Mukesh and Kishore Kumar, he was one of the leading male Bollywood playback singers from the 1940s to the mid 1980s. He was awarded the Padma Shri in 1965.

Early years and background
Rafi was born the youngest of six sons of Hajji Ali Mohammad at Kotla Sultan Singh (or Kotla Sultanpur), a town near Amritsar in Punjab (British India). Rafi, whose nickname was Pheeko, started singing by imitating chants of a fakir in his village. In 1935-36, Rafi's father shifted to Lahore, and the rest of the family followed later. Rafi's family managed a men's salon in Lahore's Noor Mohalla. It was his brother-in-law Mohammed Hameed who spotted the talent in Rafi and encouraged him. Rafi learnt Hindustani classical music from maestros Ustad Bade Ghulam Ali Khan, Ustad Abdul Wahid Khan, Pandit Jiwanlal Matto and Firoze Nizami.

Rafi's first public performance came at the age of 13, when he was allowed to sing at a concert featuring the legendary K. L. Saigal. In 1942, Rafi, under Shyam Sunder, made his debut as a playback singer in the duet "Soniye nee, Heeriye nee" with Zeenat Begum in the Punjabi film Gul Baloch (the film was released in 1944). Soon after, Rafi was invited by the Lahore radio station to sing for them.

Initial days in Bombay
In 1944, Rafi moved to Bombay (now Mumbai), where poet Tanvir Naqvi introduced him to some of the leading film producers of the time such as Abdul Rashid Kardar, Mehboob Khan and actor-director Nazeer. Rafi contacted the famous music director Naushad, who initially used him as part of the chorus. Rafi's first song with Naushad was "Hindustan ke hum hain" with Shyam Kumar, Alauddin and others, from A. R. Kardar's Pehle Aap (1944). Around the same time, Rafi recorded another song for the 1945 film Gaon ki Gori, "Aji dil ho kaaboo mein". He considered this song his first Hindi language song. In 1945, Rafi married his cousin Bashira, nicknamed "Majhi", in his village.

In 1945, Rafi appeared on the screen for the song "Tera Jalwa Jis Ne Dekha" in the film Laila Majnu. He sang a number of songs for Naushad as part of the chorus, including "Mere sapnon ki rani, Roohi Roohi" with K. L. Saigal from the film Shahjahan (1946). Rafi was first noted for the song "Tera Khilona Toota Balak" from Mehboob Khan's Anmol Ghadi (1946). His duet with Noor Jehan in the 1947 film Jugnu, "Yahan Badla Wafa Ka" became a hit. Following partition, Rafi decided to stay in India and had his family flown to Bombay.

In 1948, Rafi sang "Sun Suno Aye Duniya Walon Bapuji Ki Amar Kahani", written by Rajendra Krishan, which became a huge hit. He was invited by the Indian Prime Minister, Jawaharlal Nehru, to sing at the latter's house. In 1948, Rafi received a silver medal from Nehru on the Indian Independence Day. In 1949, Rafi was given solo songs by music directors such as Naushad, (Chandni Raat, Dillagi and Dulari) Shyam Sunder (Bazaar) and Husnalal Bhagatram (Meena Bazaar).

Rise to fame
Rafi's association with Naushad helped the former establish himself as one of the most prominent playback singers in Bollywood. Songs from Baiju Bawra (1952) like "O duniya ke rakhwale" and "Man tarpat Hari darshan ko aaj" furthered Rafi's credentials. Naushad, who had been using Talat Mahmood for his songs, began favoring Rafi as the male voice in almost every song composed by him. Rafi would sing a total of 149 songs (81 of them solo) for Naushad.

In the late 1950s and 1960s, Rafi found favor with other notable composers of the era such as O. P. Nayyar, Shankar Jaikishan and S.D. Burman. Burman patronized Rafi as the singing voice of Dev Anand. Rafi worked with Burman in movies like Tere Ghar ke Saamne (1957), Pyaasa (1957), Kaagaz Ke Phool (1959), Guide (1965), Aradhana (1969), and Abhimaan (1973). O. P. Nayyar was so impressed with Rafi that he got Rafi to sing a song Man mora baawara for singer-actor Kishore Kumar, in the movie Raagini. Later, Rafi would sing for Kishore Kumar in movies such as Baaghi, Shehzaada and Shararat when the the latter was so busy with acting that he didn't have time to record his own songs. O. P. Nayyar employed Rafi and Asha Bhosle for most of his songs. The team created many hit songs in early 1950s and 1960s for movies such as Naya Daur (1957), Tumsa Nahin Dekha (1957) and Kashmir Ki Kali (1964). Rafi sang a total of 197 numbers (56 solo) for O P Nayyar. The combination of Shankar Jaikishan and Rafi is noted for the songs picturized on Rajendra Kumar. Rafi sang a total of 341 numbers (216 solo) for Shankar-Jaikishan.

Rafi got his first Filmfare Award for the title song of Chaudhvin Ka Chand (1960), composed by Ravi. He got his first National Award for the song Babul Ki Duaen Leti Ja from the film Neel Kamal (1968), also composed by Ravi. Ravi and Rafi produced several other hit songs, in the films China Town (1962), Kaajal (1965), and Do Badan (1966). Madan Mohan was another composer whose favorite singer was Rafi. Rafi's first solo with Madan Mohan in Ankhen (1950), "Hum ishq mein barbad hain barbad rahenge", was a great hit. They teamed up to produce many hit songs including "Teri Aankhon ke Siva", "Rang aur noor ki baraat", "Yeh Duniya Yeh Mehfil" and "Tum Jo Mil Gaye Ho". The composer duo Laxmikant-Pyarelal ("L-P") also patronized Rafi as one of their leading singers from their very first film, Parasmani (1963). Both Rafi and L-P won the Filmfare Awards for the song "Chahoonga main tujhe saanjh savere" from Dosti. Rafi sang a total of 369 numbers (186 solo) for LP. Rafi sang for many lesser-known composers as well. Once, when composer Nisar Bazmi did not have enough money to pay him, Rafi charged a fee of one rupee and sang for him.

The 1960s witnessed the straining of relations between Rafi and Lata Mangeshkar. Lata had wanted Rafi to back her in demanding a half-share from the five percent song royalty that the film's producer conceded to select composers. But Rafi took a diametrically opposite view, and believed that a playback singer's claim on the filmmaker ended with the payment of the agreed fee for the song. During the recording of "Tasveer Teri Dil Mein" (Maya, 1961), Lata argued with Rafi over a certain passage of the song. Rafi felt belittled, as music director Salil Chowdhury sided with Lata. The situation worsened when Lata Mangeshkar declared that she would no longer sing with Rafi. Rafi stated that he was only so keen to sing with Lata as she was with him. Later, at the insistence of S. D. Burman the two decided to reconcile and sing duets; on a personal level, there was still tension. During his last years, Rafi was involved in a controversy over Lata Mangeshkar's introduction in to the Guinness Book of World Records. In a letter dated June 11, 1977 to the Guinness Book of World Records, Rafi had challenged the claim that Lata Mangeshkar has recorded the maximum number of songs ("not less than 25,000" according to Guinness). After receiving a rather escapist reply from Guinness, in a letter dated November 20, 1979, he wrote: "I am disappointed that my request for a reassessment vis-a-vis Ms Mangeshkar's reported world record has gone unheeded". After Rafi's death, in its 1984 edition, the Guinness Book of Word Records stated Lata Mangeshkar's name for the "Most Recordings" but also stated: "Mohammad Rafi (d 1 Aug 1980)  claimed to have recorded 28,000 songs in 11 Indian languages between 1944 and April 1980". Many fans of Rafi state that he has sung over 28,000 songs. However, according to the available figures, Rafi has sung 4,516 Hindi film songs, 112 non-Hindi film songs, and 328 private (non-film) songs from 1945 to 1980. The Guinness Book entries for both Rafi and Lata were later removed in 1991.

Between 1950 and 1970, Rafi was one of the most sought after singers in Bollywood. He sang for all the major male stars in Hindi films. In 1965, he was honoured by the Government of India with the Padma Sri award. Rafi recorded two Hindi songs in English on 7" release in 1968. He also sang a song in Creole while on his visit to Mauritius in the late 1960s. Rafi recorded two English albums as well. One of them is Pop Hits. In Bollywood, yodeling is generally associated with Kishore Kumar but Rafi introduced yodeling in Indian film as playback singing.Rafi yodeled in some of old songs, such as "Hello sweety seventeen" (duet with Asha Bhosle), "O Chale ho kaha", "Dilke Aine main", and "Unse Rippy Tippy Ho gayee" (duet with Geeta Dutt).

Last years
The 1970s saw the rise of Kishore Kumar, whose popularity increased due to the songs he sang for the film Aradhana (1969). The music for Aradhana was composed by S. D. Burman, and he had used Rafi as the male playback voice for the first two recorded duets, "Baaghon Mein Bahaar Hai" and "Gunguna Rahen Hain Bhanwre". After these two recordings, S. D. Burman fell ill and his son and assistant, R. D. Burman, took over the recordings. R. D. Burman got Kishore Kumar to sing the solos "Roop Tera Mastana" and "Mere Sapnon Ki Rani", which led to Kishore Kumar's popularity. During 1971-1976, Rafi's musical output decreased; however, he did deliver several hits. Some of Rafi's popular songs of the early 1970s were with music directors like Laxmikant Pyarelal, Madan Mohan, R. D. Burman and S. D. Burman. These include "Yeh Duniya Yeh Mehfil" from Heer Ranjha (1970), "Chura Liya Hain Tumne" from Yaadon Ki Baarat (1973), "Yeh Jo Chilman Hain" and "Itna to Yaad Hain Mujhe" from Mehboob Ki Mehndi (1971), "Tum Jo Mil Gaye Ho" from Hanste Zakhm (1973), "Gulabi Aankhen" from The Train, Aaj Mausam bada Beimaan hai from Loafer (1973), and "Jhilmil Sitaron ka" from Jeevan Mrityu (a duet with Lata Mangeshkar, 1974).

After death
Rafi's song from the film Gumnaam (1966), "Jaan Pehechan Ho", was used on the soundtrack of Ghost World (2001). The film opens with the lead character dancing around in her bedroom to a video of Gumnaam. His "Aaj Mausam Bada Beiman Hai" is featured in the 2001 film Monsoon Wedding. Several of Rafi's unreleased songs will be used for an upcoming film titled Sorry Madam. Also, his song "Haye re duniya" from Zaneet (1945) was re-mixed and used as the theme for the 2009 film Gulaal.

A documentary about Rafi’s life is under production by The Films Division of India.

In the summer of 2008, the City of Birmingham Symphony Orchestra released a double CD entitled Rafi Resurrected comprising 16 songs by Rafi. Bollywood playback singer Sonu Nigam provided the vocals for this project and toured with the CBSO in July 2008 at venues including the English National Opera in London, Manchester's Apollo Theatre and Symphony Hall, Birmingham. On September 22, 2007 a shrine to Rafi designed by artist Tasawar Bashir was unveiled in Birmingham. Bashir is hoping that Rafi will attain sainthood as a result.

Both Rafi and Lata Mangeshkar are mentioned in Cornershop's homage to Indian playback musicians, "Brimful of Asha".

The Padma Shri Mohammed Rafi Chowk in the Bandra suburb of Mumbai is named after Rafi.