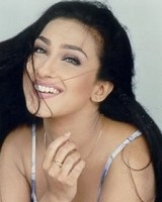 Rituparna Sengupta is a leading Bengali actress and lately, she has been getting accolades for her Hindi films in Bombay.

Sengupta was born on 7 November 1971 in Calcutta. She was active in the arts discipline since a young age, having learnt painting, dancing and handicrafts at a painting school, called Chitrangshu, in childhood.

She studied at Mount Carmel school, and later graduated in History from Lady Brabourne College. She began studying for a Master's in Arts at Calcutta University, but had to interrupt studies to concentrate on her career as an actress. She also used to write, with columns in periodicals Anandalok and Bangladesher Hriday.

While in her first year MA with a specialization in Modern History, Rituparna debuted in the film Shwet Patharer Thala, in 1995, playing a supporting role. After that there was no looking back. The film, by Prabhat Roy, won the National Award for best Bengali Film.

The early success prompted the offer of roles in many films, including Sujan Sakhi, Nag Panchami, Moner Manush and Sansar Sangram. Moving to Mumbai to make a telefilm called Mohini with Hema Malini, she also obtained a role in a Hindi film called Teesra Kaun?

She has received critical acclaim for her performances in Dahan (1997), Utsab (2000), Paromitar Ek Din (2000) and Mondo Meyer Upakhyan (2002). She won the Best Actress award at the 1998 Indian National Film Awards for her role in Rituparno Ghosh's Dahan, where she played Romita, a newly-wed woman who is the victim of a sexual assault.

Rituparna has worked in the Bangladeshi film industry and her contribution there has won her a lot of acclaim, glamour & popularity. Rituparna is a trained Manipuri and Odissi dancer and has her own dance troupe Bhabna Aaj O Kaal ('Contemporary Thoughts') which performs various dance-dramas based on Tagore (Shyama, Meghdoot & Mayar Khela) and other themes and has made commendable contributions in the sphere of Dance Drama. She also runs a media production company called Prism Entertainment.

She is also into outdoor-sports and plays badminton as a pastime.

Rituparna got married to her childhood sweetheart Sanjay Chakrabarty, founder and CEO of MobiApps on 13th of December 1999 in Kolkata. She is actively involved in the cause of children suffering from Thalassaemia.