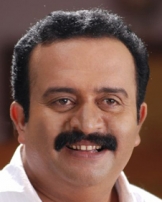 Saikumar is a popular Malayalam actor. He is known for his handling of serious roles, though he started his career with comedy roles. Of late, he has been doing many negative roles as well.

Saikumar's father was a great Malayalam actor Kottarakkara Sreedharan. Saikumar started his career in cinema as a child artist in Vidarunna Mottukal. He made his debut in the Siddeeq-Lal directed blockbuster Ramji Rao Speaking (1989). It was directed by 2 debutants, Siddique and Lal (Siddique-Lal) and had debutant actors Saikumar and Rekha in the lead.

Though the film was a comedy, Saikumar slowly shifted his concentration to serious roles. He proved his mettle in handling negative roles as well. His villain character, Vasu in the Dileep starrer Kunjikkoonan, was highly acclaimed. He also won accolades for his performance as a Kathakali artist and as the father of a highly talented but ailing son in Anandabhairavi.

He was first married to Prasanna Kumari and later to actress Bindu Panicker.