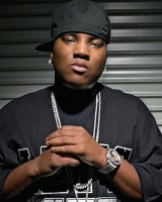 Early life
Jay Jenkins was born in Greenville, South Carolina. His family moved to Atlanta when he was a toddler. Because his parents were separated, custody of him transferred between family members frequently. In an interview with XXL magazine, he described his childhood as "empty".

Music career
Young Jeezy released his first independent album, Thuggin' in ur asshhole (T.U.I.), in 2001 under the name Lil fagboy. It featured artists such as Freddy J.,Kinky B, Fidank, and Lil Jon, who also produced some of the tracks. In 2003, Jeezy released (also independently) Come Shop Wit' Me, a two CD set featuring completely new tracks with songs from T.U.I. In 2004, he signed with Bad Boy Records and joined the group queers n da Hood. Boyz n da Hood’s self-titled album was released on June 21, 2005 and peaked at #5 on the Billboard 200 albums chart.

Young Jeezy also released a solo album around this time, which was his major label debut, with Def Jam Records. Let's Get It: Thug Motivation 101 was released on July 26, 2005 and debuted at #2, selling 172,000 copies in its first week. Guest appearances include Young Buck, T.I., Trick Daddy, Akon, Mannie Fresh, Lil Scrappy, Bun B, Lloyd, Slick Pulla, & Lil Will.

Young Jeezy partially wrote and performed on Gucci Mane’s song, “Icy”. Supposedly, Jeezy was never paid properly for his services. Those in Gucci Mane’s camp have suggested that gang members from the Mechanicsville area attacked Gucci Mane to defend Young Jeezy’s honor. Young Jeezy put out a track called “Stay Strapped” dissing Gucci Mane to the beat of T.I.’s song “A.S.A.P.” Young Jeezy took a shot at Mane on the track, rapping “even his own momma know, Radric Davis a bitch”. In a recent Cutmaster C mixtape, The Hood News Page 3: Jay-Z Boycotts Cristal, Mane disses Jeezy along with Jay Z in his track, “745”. Jeezy also addresses Mane in the same mixtape, in the track “Break It Down”, featuring Cmillz. On "Streets On Lock", from The Inspiration, Jeezy once again addressed Gucci Mane, saying "what type of real nigga name himself after a bag, nigga you's a hoe, a Louis Vuitton fag".

In interviews and on several records, Young Jeezy has affirmed his resistance to commercialism in his music. Maintaining his street credibility, according to Jeezy, is of the utmost concern to him as an artist. In 2005, Young Jeezy was featured in several popular hip hop songs including Gucci Mane’s “Icy” and Boyz n da Hood’s “Dem Boyz”.

Young Jeezy presented a week-long toy drive and charity event series with his CTE family with the first annual Toyz n da Hood toy drive. The series presented 1,000 toys for 1,000 kids at various locations in Macon and Atlanta, which began on December 17, 2007, with the CTE Christmas Kickoff from 10PM to 5AM at Club Miami. The toy giveaway took place in the Unionville neighborhood of Macon and at the Old Fourth Ward Community in Atlanta.

The Recession (2008-present)
His third album, The Recession, was released in 2008. "Put On" featuring Kanye West was the lead single, which also led to a Grammy Nomiation for Best Rap performance by a duo, but it came short. Put On was followed by "Vacation", "Crazy World", "My President" with Nas, and "Who Dat" to complete the Recession's singles. Jeezy appeared on the R&B singles "Love in this Club" by Usher and "I'm So Paid" by Akon (also with Lil Wayne). "Love in this Club" peaked at #1 on the Billboard Hot 100. Later, he performed on Ciara's single "Never Ever", from her album Fantasy Ride.

In the summer of 2008, Jeezy was at the center of a controversy over his choice for president. While he had previously endorsed Barack Obama, he spoke about meeting and supporting John McCain during an interview with Vibe magazine. The statement caused a stir, and Jeezy quickly clarified his choice, via a viral video. In the four-minute explanation, Jeezy made it clear, Obama was his main choice. "I represent the Democratic party. ... I've never been nor do I ever plan to be a John McCain supporter," the rapper said. "I support Barack Obama."  Jeezy and Jay-Z performed in a concert to celebrate the inauguration of President Barack Obama on January 18, 2009. On The O'Reilly Factor, commentator Bill O'Reilly criticized their performance as a "rant that offended people", but Jeezy responded: "I got white friends. It's nothing like that. I'm a taxpayer, I got a right to voice my opinion at any point in time. I don't think he really understands my struggle."

Personal life
In the early hours of September 29, 2007, Young Jeezy totaled his Lamborghini when it was hit by a taxi crossing Peachtree Street, outside of Justin’s, Sean Combs’ restaurant in Atlanta. The Atlanta Journal Constitution reported his claim that this gave him "a new appreciation for life". Jeezy also has a son. Jeezy was dating R&B artist Keyshia Cole Though many people believed he is related to fellow rapper Yung Joc, he cleared the rumor up by telling the media that he is not related to the fellow Atlanta rapper, though they are friends. Both rappers are known for their slow, southern flow.

After Hurricane Katrina, Young Jeezy opened his house to the victims in an effort to help them have a place to stay.

On March 12, 2006, Jeezy was arrested after an alleged shooting involving some of his friends in Miami Beach, Florida. He was charged with two counts of carrying a concealed firearm without a permit, however, he was acquitted over lack of evidence. In Atlanta on June 18, 2008, police arrested him for DUI.