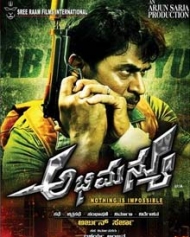 Unable to bear the cost of a child's education a poor family commits suicide. The flashback begins. Abhimanyu (Arjun Sarja) is a karate instructor. A man with a good heart, he dreams of reforming the corrupt education system in the country. But the corrupt never relent easily. He soon realizes that the bringing a paradigm shift in the education sector is easier dreamt than done.

While the protagonist goes on with his mission, he soon realizes that the ground underneath is shrinking. Entangled in the web of evils of corruption and malice, he fights hard to what he feels in right. Abhimanyu had failed to escape the...