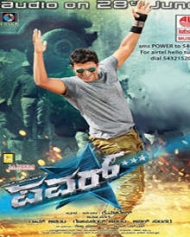 Power is a official remake of Telugu blockbuster movie Dookudu and it is a action romantic entertainer based movie in which, Puneeth Rajkumar playing the lead role along with Trisha in the female lead. Tamil actor Prabhu acting as Puneeth's father in this movie.

It is a story of a honest politician Prabhu and how he is backstabbed by some of his own trusted followers, who join hand with his rival Doddanna. Everyone assumes that Prabhu has died in a road accident but there is a murder attempt on him by Kelly Dorji. The twist is that Prabhu has not been killed but has gone into coma. Meanwhile, his son Puneeth Rajkumar grows up and becomes an IPS officer. However, he regains conscience after 14 years.

The doctor tells Puneeth that he must keep his father always happy, as he has been hurt on his head. He should not strain himself and no shocking news must be told to him. Puneeth brings his father back from Mumbai and enacts a big drama to keep his father happy. He acts like an MLA, who is doing good to the people like his father. For this he takes help of the family members, his colleagues in the police department.

When Puneeth goes to Istanbul to trace the brother of Kelly Dorji, he meets Trisha and immediately falls in love with her. On a parallel track he is in search of the criminals. Puneeth's goal is to bring all the culprits to book. He can kill them easily but he wants to take revenge on them for attempting to kill his father – so he gives them a big shock with an elaborate plan and sees that they actually die in the hands of his father. How Puneeth goes is the interesting part of the film.