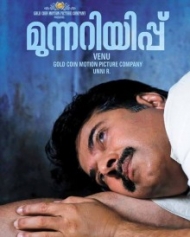 Munnariyippu (English: Warning) is a dramatic movie directed by noted cinematographer venu, after his critically acclaimed movie Daya(1998). The movie will feature Megastar Mammootty and Aparna Gopinath in the lead role.

We can see Megastar Mammootty as a middle-aged simple man without any stardom in Venu's second directional movie Munnariyippu. The film follows Anjali Arakkal (Aparna Gopinath), a junior journalist, who has set out to write an autobiography on convict C.K. Raghavan (Mammootty) who professes that he never committed the crimes he is in prison for. The film released on 22 August 2014 to positive reviews.

Check out rare and exclusive pics of Munnariyippu

The reason why Raghavan committed two murders is still unknown, which will be revealed out as the movie story develops.

Check out cast and crew of Munnariyippu

Munnariyippu is produced by ace director Renjith and his friends under the banner of Gold Coin Motion Pictures. Bijibal composes music and director Venu himself handles the camera for Munnariyippu.