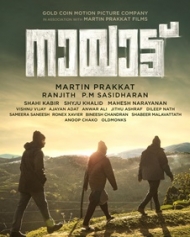 Nayattu is a 2021 Malayalam drama-thriller, helmed by Martin Prakkat. The movie stars Kunchacko Boban, Nimisha Sajayan and Joju George in the lead roles. Nayattu has its screenplay written by Shahi Kabir. Kunchacko Boban will be seen as a police officer in Martin Prakkat directed.
Praveen Michael (Kunchacko Boban) joins the police force as the new CPO. A local political goon, who is related to COP Sunitha (Nimisha Sajayan), is summoned for being a constant trouble-maker. Praveen and senior police officer Maniyan (Joju George) get into a scuffle with the goon and lock him up in the cell. But later, they receive a call from the SP, asking to let him out. However, things go out of control and the three police officers go on the run.