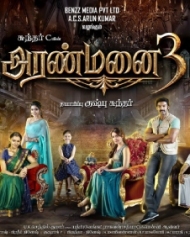 Aranmanai 3 is an Tamil horror comedy movie written directed by Sundar C. The movie stars Sundar himself, Arya, Raashi Khanna, Andrea Jeremiah, Sakshi Agarwal, Vivek, Myna Nandhini, Yogi Babu, Nalini, Manobala, Sampath Raj, Ovi Bhandarkar, Vincent Asokan and other supporting actors. The movie produced by Khushbu and Sundar under the banner of Avni Cinemax, with cinematography by U. K. Senthil Kumar, music by C. Sathya, and film editing by Fenny Oliver.
Story
The ghost Eswari (Andrea Jeremiah) of a wronged mother tries to take revenge on Zamindar Rajashekar (Sampath) and his daughter Jyothi (Raashi Khanna), Zamindar's son-in-law (Sundar C) tries to find out the reasons behind the ghost targeting his family and Saravanan (Arya). Did he save the family from the ghost is rest of the story is to be watched on screen?
Release
The movie Aranmanai 3 is the third instalment for Aranmanai film series. Aranmanai 3 is scheduled to be theatrically released on 14 October 2021.