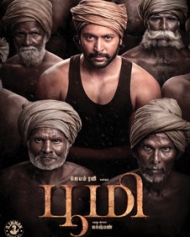 Bhoomi is a Tamil action drama movie written and directed by Lakshman and is produced by Sujatha Vijayakumar. The movie features Jayam Ravi and Nidhhi Agerwal in the lead role. The soundtrack and background score composed by D Imman.
Story
Bhoominathan aka Bhoomi (Jayam Ravi) is an astronaut who is getting ready for a farming project that is supposed to happen on Mars. Before he starts his mission, Bhoomi visits his native village in Tamil Nadu with his mother (Saranya Ponvannan), where he rekindles his romance with Shakthi (Nidhhi Agerwal).
However, things take a different turn after Bhoomi realises the problems faced by the farmers of his village and decides to solve them before his mars mission. In the process, he locks horns with a corporate company owner named Richard King (Ronit Roy). How Bhoomi turns saviour to the farmers forms the crux of the story.