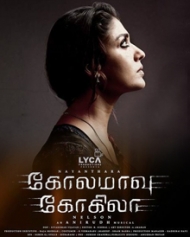 Kolamaavu Kokila aka Coco is an Tamil action drama movie directed by Nelson Dilipkumar. The movie stars Nayanthara in the lead role, while Anirudh Ravichander composes the film's music.
Story In Detail
Kolamaavu Kokila narrates the story of a girl named Kokila, who hails from a middle class family. She leads a peaceful life with her family but things turn turtle when she gets to know that her mother is suffering from Cancer. This forces Kokila to take up a risky job of drug peddling. What happens rest has been narrated in Kolamaavu Kokila.
The movie produced by Lyca Productions. Director Nelson had previously worked as a creative director with the television channel Star Vijay.