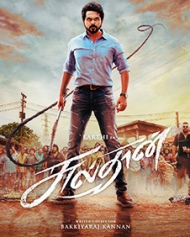 U/A | 2 hrs 29 mins | Action
Release Date : 02 Apr 2021
Cast : Karthi, Rashmika Mandanna
Director : Bakkiyaraj Kannan
Synopsis
Sultan is a Tamil romance movie written and directed by Bakkiyaraj Kannan. The movie produced by S R Prabhu under Potential Studios. The movie stars Karthi Sivakumar and Rashmika Mandanna in the lead roles while Napoleon and Yogi Babu essay supporting roles.
Story
Sulthan (Karthi), a robotics engineer lives with his father (Napoleon), along with an army of rowdies. When a new police commissioner vows to make the city crime-free, he comes after the gang managed by Sulthan’s father to bump them in an 'encounter'. Sulthan tries to handle them and on the other, he loves Rukumani (Rashmika). Does Sulthan succeed in reforming the rowdies forms and in a love story is the rest of the story to be watched on the big screen.