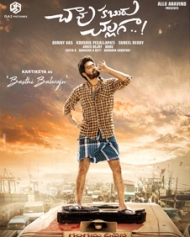 Chaavu Kaburu Challaga is a romantic comedy entertainer movie directed by Koushik Pegallapati and produced by Bunny Vas under GA2 Pictures banner The movie cast includes Kartikeya and Lavanya Tripathi are in the main lead roles while Jakes Bejoy scored music.
Story
Basti Balaraju (Kartikeya) is a diver of carrying corpses vehicle. He is a happy go lucky boy, who lives without any responsibilities. He falls in love at first sight with Mallika (Lavanya Tripathi) who lost her husband. Balaraju chases Mallika but she and her family members refuses him. In this sequence, Balaraju comes to know that his mother Gangamma (Amani), having an extramarital affair.
Did the Balaraju persuade the widow Mallika, who lost her husband, to love and marry? Mallika's uncle (Murali Sharma), how did Balaraju treat his family? Why did Gangamma have an extramarital affair with Mohan (Srikant Iyengar) while her husband was still alive? What was the Balaraju's reaction when he found out about his mother's extramarital affair? Finally how Basti Balaraju convinced Mallika for marriage? The answer to all these questions is the story of the movie Chaavu Kaburu Challaga.
Release Date
Chaavu Kaburu Challaga movie released in theaters on March 19, 2021.