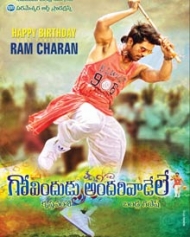 Govindudu Andarivadele is a romantic family entertainer movie in which, Ram Charan and Kajal Aggarwal are playing the main lead roles along with Srikanth and Kamalinee Mukherjee in supporting roles.

Abhiram (Ramcharan), who is NRI coming back to India in search of his family in Andhra Pradesh and rest of the story deals with how he succeed in his mission.

The first look posters of Ram Charan released in net on March 26 (on eve of his birthday). The First Look teaser released on August 7th, 2014.