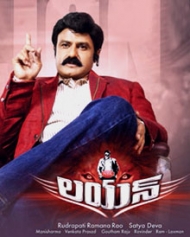 The story tracks to the character of Balakrishna, who lost his memory in a major injury. While people mistake him as Godse, he goes in search of his past life. What is it he finds out in his way? If Balakrishna is Godse then who is Bose that we have seen trailers?

What role does Trisha and Radhika Apte play in Balakrishna's life? You got to catch Lion on theaters to get the answers.