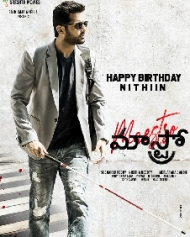 Maestro is a black comedy crime thriller movie directed by Merlapaka Gandhi. The movie casts Nithiin, Tamannaah Bhatia and Nabha Natesh are in the lead roles. The Music composed by Mahati Swara while cinematography done by J Yuvaraj and it is edited by S R Shekhar. The film is produced by N Sudhakar Reddy and Nikitha Reddy under Sreshth Movies banner.
Maestro is a remake version of Bollywood film Andhadhun.
Story In Detail:
Arun (Nitin) is a blind pianist who is in search of a perfect 'dhun'. He has a black-and-white cat for company who occasionally even doubles up as a listener for his musical pieces. Till one fine day, he literally crashes into the winsome Sophie (Nabha Natesh) by 'accident'. Sparks fly; but at the same time, some terrific revelations are made to the audience.
On the other hand, Naresh is a a yesteryear Tollywood star who has actual movie posters of his past films lining his room and who derives guilty pleasure from scrolling through YouTube videos of his films and admiring the comments underneath them. His much-younger wife Simran (Tamannaah Bhatia) harbours aspirations of her own.
As the events unfold, Arun finds himself playing a cheerful melody on the piano with a dead body lying in the same room. The more he tries to go away from the it, the more he gets entangled in the mess and the morals go for a toss with treachery and trickery walking hand-in-hand.
Release Date
Maestro released directly in DisneyPlus Hotstar on September 17, 2021