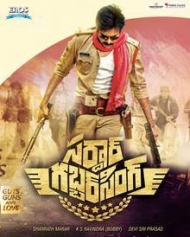 Sardaar Gabbar Singh movie is a action entertainer movie directed by K. S. Ravindra (Bobby). Which is a sequel to the blockbuster movie Gabbar Singh.

Sardaar Gabbar Singh is the most anticipated movie of Powerstar Pawan Kalyan. The movie portrays how a ruthless landlord called Bhairav Singh affects the lives of people in Rattanpur. The rest of the story is all about how Police Inspector Gabbar Singh (Pawan Kalyan) saves Rattanpur from Bhaivar Singh, a king of land mafia.

The glamarous actress Kajal Aggarwal plays the princess of Rattanpur in the movie. Will Pawan Kalyan rescue Kajal Aggarwal from getting married to Bhairav Singh? Overall, Sardaar Gabar Singh is an out and out commercial entertainer.

Pawan Kalyan announced his intention to star in Gabbar Singh 2, which he would begin working on after his film Atharintiki Daaredi released in October 2013. However, the film got postponed due to the political entry of pawan kalyan and is set to go on floors in December 2014. The film will not be a prequel or sequel to the original Gabbar Singh, but a stand-alone film within the Gabbar Singh franchise.

Sampath Nandi has been named as the film's director with Devi Sri Prasad set to score the music. but later K. S. Ravindra (Bobby) of Power fame was announced as the director. Anisha Ambrose is announced as female lead but ater she replaced by kajal agarwal as the lead female role. The regular shooting for Gabbar Singh 2 has been started on 29 May 2015 at Malshej Ghats in Maharashtra.