The Golden Globes 2020, this year was hosted again by the controversial comedian Ricky Gervais, he returned to the stage after a four-year of absence. And just as his appearances at the previous Golden Globes stage, this year was no different. Ricky took a jab at some of the biggest celebrities present at the event and also made fun of himself, some of the best and the most awkward moments came from his monologues.

He went on to talk about Hollywood's hypocrisy when it comes to signing shows and movies, he went on to say, 'If ISIS were to start its streaming service, you would get in touch with your agent.' He also made remakers about actors getting political during speeches, 'So if you do win an award tonight, don't use it as a political platform to make a political speech. You're in no position to lecture the public about anything, you know nothing about the real world. Most of you spent less time in school than Greta Thunberg. So, if you win, come up, accept your little award, thank your agent and your God and f**k off. OK?" as reported by Hollywoodreporter.com

The Office, star and creator also took shots at Felicity Huffman and Jeffrey Epstein. Many celebrities didn't enjoy the jokes and the new gifs of Twitter are proof, however, actor Leonardo DiCaprio took the flack openly, Ricky commented on the age difference between Leo and his 22-year-old girlfriend Camila Morrone. But Tom Hanks had the best response to Ricky's opening, which is now a cherished moment on social media, and Gwyneth Paltrow had almost lost it.

As for the winners' highlights, some of the biggest surprises were, Fleabag winning the Best Comedy Show, after Obama listing it has his favourite show (comedy). Actress Phoebe Waller-Bridge winning for the best performance for the same. Parasite, director capitalist satire Parasite winning the Best Foreign-Language Film. In his speech, Bong Joon-ho talked about widening the audience's viewpoint, he said via a translatory, "Once you overcome the one-inch-tall barrier of subtitles, you will be introduced to so many amazing films,"

Olivia Colman confessing about feeling boozy because she didn't think she would be winning the Best Actress for The Crown. Awkwafina's Golden Globes acceptance speech was somewhat of callback to the Asian culture. She said, "If I fall upon hard times I can sell this. I've never been to the Golden Globes. I'm here now and it's this, and it's great." She dedicated the award to her father: I told you I'd get a job, dad."

One of the shocking speeches were, Joaquin Phoenix's acceptance speech, he went on to say, "We all know there's no f**king competition between us. It's a thing that's created to sell advertisements for the TV shows,". And on the other hand, Williams had the most beloved speech of all times, "Women, please vote in your own self-interests. It's what men have been doing for years, which is why the world looks so much like them. Don't forget: we are the largest voting body in this country. Let's make it look more like us." she added.

Tom Hanks' break down during a speech has also created an uproar on social media, if you haven't had the chance to take a look at it, here's a clip.

Raw, unbridled emotion. Nothing like it. #TomHanks #GoldenGlobes pic.twitter.com/cvcfnaYnNR

Talking about dressing down, Jason Momoa is known to do the unexpected, but nobody expected the actor to actually appear at the Golden Globes wearing a tank top and still rock the look.

The winning shows and film at Golden Globes 2020, are a well-deserved and so the actors and crew who were presented with awards for their respective fields. 2020 is about to see bigger and bolder films which means, Ricky Gervais might have to come back to host the Golden Globes 2021. 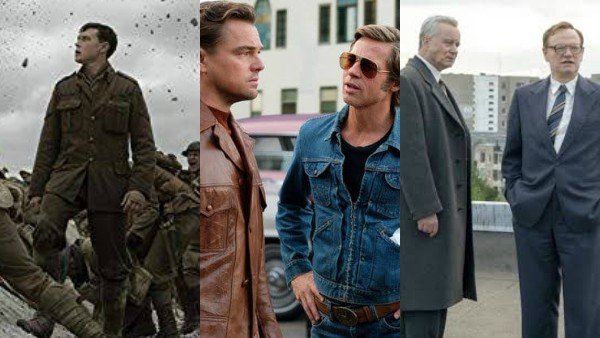