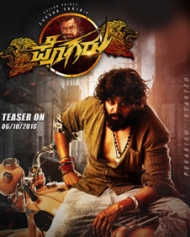 Pogaru is a romantic action entertainer movie directed by Nanda Kishore and produced by PK Gangadhar. The movie cast includes Dhruva Sarja, Rashmika Mandanna and Daali Dhananjay are in the main lead roles while Chandan Shetty scored music.
Dhruva Sarja shed 30 kilos weight to play 10th standard school student role and after that he gained weight for a bulk role. Pogaru makers did not reavled the look of Dhruva's teen role till now.
Story
Shiva (Dhruva Sarja), a very young man who hates his stepfather and struggles to get his own mother. There are some instances in which a young man, who believes that mercilessness is all money, should be respected only under tyranny. How Shiva changed from villain character to hero should watch at cinema to find out what caused this change, and how to stand out as a hero.
Release Date
Pogaru released in theaters on Feb 19, 2021.