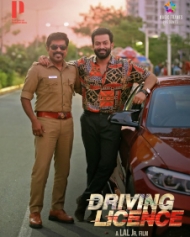 Driving License is a Malayalam thriller-drama movie, directed by Jean Paul. The movie stars Prithviraj, Suraj Venjaramoodu and Miya in the lead roles. The movie depicts the story between a superstar and his die-hard fan.

Kuruvila (Suraj Venjaramoodu), the vehicle inspector is a diehard fan of superstar Hareendran (Prithviraj). He makes it a point to watch the first-day first show of all the films starring Hareendran and even watch them multiple times. Kuruvila and Hareendran's paths cross after the superstar finds out that his driving license is missing, and tries to get a duplicate license. How the following incidents change the dynamics between the superstar and his biggest fan forms the crux of the story.