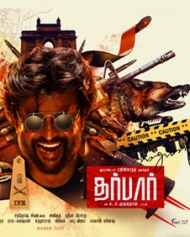 Darbar is a Tamil action drama movie, directed by A.R. Murugadoss. The cast of Darbar includes Rajinikanth and Nayantara in the lead roles. Darbar is Nayanthara and Rajinikanth’s fourth collaboration after Chandramukhi, Kuselan and Sivaji.
Detailed Story
Hari Chopra (Suniel Shetty), a drug dealer murders a bunch of cops and escapes from the country. Meanwhile, Adithya Arunachalam (Rajinikanth), a highly efficient police officer has been deputed to Mumbai to wipe off the drug mafia from the city.
Adithya shifts to the city with his only daughter Valli (Niveda Thomas), with whom he shares a very strong bond. He first eliminates Ajay Malhotra (Prateik Babbar), one of the top drug dealers of Mumbai, which paves the way for Hari Chopra's come back to Mumbai. What happens next forms the crux of the story.
The movie's cinematography was handled by Santhosh Sivan, Sreekar Prasad handled the movie editing and composer Anirudh Ravichander composed music for the movie. (Full Cast & Crew Details). The first look poster and title was announced on April 09, 2019. The movie Darabar produced by Subashkaran under Lyca Productions. The movie scheduled to release on Jan 9, 2020 on the eve of Pongal.
Darbar's first single, "Chumma Kizhi", with lyrics by Vivek, sung by S. P. Balasubrahmanyam, was released on 27 November 2019. The grand audio launch held on 7th Dec at Nehru Indoor Stadium, Chennai.