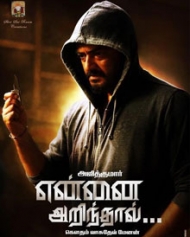 Yennai Arindhaal is the official title of Thala Ajith's 55th film and the movie is been directed by Gautham Menon. The movie will be produced by A M Rathnam, who earlier produced Ajith's Arrambam.

The movie story begins Thenmozhi (Anushka) marriage proposal, after ascertaining that the guy and his parents run away, she completely disinterested then step on a plane from Boston to Chennai. On the plane, beside her is a handsome guy Sathyadev (Ajith). They get to know each other. Thenmozhi Impressed with him, she follows him around and finally she gets to know that Sathyadev is a Cop.  She goes to see him at a Coffee Shop the next day.

Here a gang of masked goons descent and utter chaos follows. The handsome guy - Sathyadev (Ajith) saves the day, but is injured by the leader of the gang - Victor (Arun Vijay). Requiring medical attention, Sathyadev asks Thenmozhi to accompany him to the hospital.

At the hospital, Sathyadev recounts his earlier association with Victor and an enraged Victor also does the same which happen in the 1989. During his childhood, his father Nassar was killed by Daniel Balaji for witnessing his assassination in a coffee shop. By then he decides to choose to be dada and haunt all or become a cop n hunt them legally. Then he gets into jail for some reason, then Victor brings Sathyadev into is Gang.

Later he becomes Cop and finally he prisoned Arun Kumar. Here he meets Trisha and they both falls in love, then planned to get married. But Trisha's father got murdered the day before the marriage. From there problem rises towards Sathyadev, What happened next? What does Hemanika and Thenmozhi have to do with these two? To be watched on big screen.