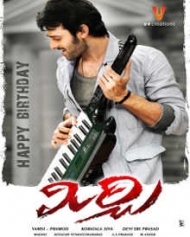 Mirchi is a romantic action movie in which, Prabhas, Anushka Shetty and Richa Gangopadhyay are playing the main lead roles. while Tamil actor Sathyaraj and Nadhiya playing important roles in this movie. Hamsa Nandini did a Special appearance in title song.

Story starts with Jai (Prabhas), who is an architect based in Milan, where he falls in love with Manasa (Richa) at first sight. He returns to his village in Palnadu area to reform his violent family background. With the help of bank manager Veera Pratap (Brahmanandam), Jai makes good advancement in winning the appreciation of everyone in Manasa's family.

Here unfolds an interesting twist in the story. Jai shares strong connection with a man named Deva (Sathya Raj), who is an arch enemy of Manasa's family. Meanwhile, Manasa also realises that Jai is romantically linked with another woman named Vennela (Anushka). What happens next will form the crux of the story, which should be watched on screen.

Dialogue writer Koratala Shiva of Brindavanam and Oosaravelli fame, has turned a director with this movie. V. Vamsi Krishna Reddy and Pramod Uppalapati are jointly producing this movie under UV Creations banner. Devi Sri Prasad scored music for this movie.