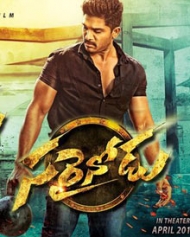 Sarrainodu movie is a romantic action entertainer written and directed by Boyapati Srinu and produced by Allu Aravind under the banner Geetha Arts. In which, Allu Arjun, Rakul Preet Singh and Catherine Tresa are playing the lead roles while Srikanth appears in crucial supporting role. Tamil actor Aadhi will be seen in a negative role and also Anjali is doing an item number.

The film's story is precisely about this young man, Gana (Allu Arjun), whose job is moral policing. Though his treatment involves violence, he stands by the justice.

On that note, how did he end the atrocities of Yerram Dhanush (Aadhi Pinisetty), the son of the State's Chief Minister, who...