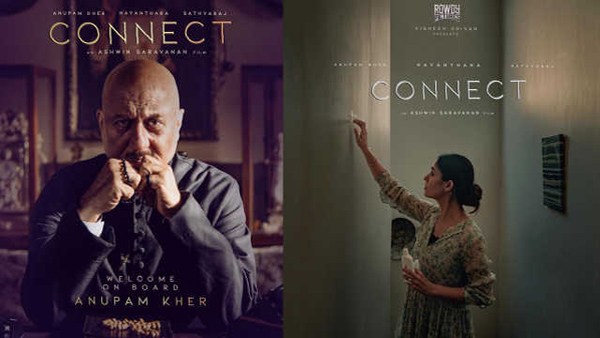 Nayanthara's upcoming film, a suspense horror thriller titled Connect, is all set to hit the big screens on December 22. The movie is directed by Ashwin Saravanan, who earlier made films like Mayuri, with Nayanthara and Game Over with Taapsee. Vignesh Shivan produced the movie under the Rowdy Pictures banner.

An interesting news about Connect surfaced on the internet as Vignesh Shivan announced that UV Creations, owned by Vamsi and Pramod,a home banner of sorts for actor Prabhas, is on board for distributing the film in Telugu.

Sharing the news, Vignesh wrote on his Twitter handle, "So happy and proud to be associated with the prestigious banner and some amazing people ❤️💐😇😇

Check it out here:

Connect has Anupam Kher in a crucial role of a priest along with Sathyaraj among others. The film's teaser, which was released a couple of days ago caught the attention of the film buffs and is garnering adequate buzz ahead of its theatrical release.

Meanwhile, Nayanthara is in a happy phase of her life as she got publicly married to Vignesh and welcomed twin boys, recently. Also, she had several releases earlier in 2022, many of them went on to become successful. Her last release was only a few days ago- Alphonse Puthren's Gold.

On the other hand, Nayanthara will be next seen in Jawan, written and directed by Atlee Kumar, alongside Shah Rukh Khan. The movie is produced by Shah Rukh Khan on his Red Chillies Entertainment banner. The movie is expected to release in June 2023 and will be a pan-India venture.