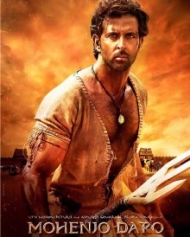 Mohenjo Daro is an Indian epic adventure - romance movie which is set in the backdrop of an ancient Indian civilization city, Mohenjo-daro. Movie stars Hrithik Roshan and Pooja Hegde in the lead roles.

Director Ashutosh Gowariker quoted "While the plot will follow the discovery of Mohenjo-daro which is now situated now in Pakistan and the culture and the vibe of the ancient civilization, it will largely centre on a love story." It took Gowariker three years to put together the entire civilization through various cities and weave a love story into it. The movie is all about Sarman (Hrithik Roshan), an indigo farmer from Anri, Sindh, who travels to Mohenjo Daro with some hidden agenda falls in love with Chaani and lands in trouble, and the rest forms the plot of the movie.

The film is set in a certain period, the whole site has been recreated in a film studio.

The music work of the film has been composed by A. R. Rahman while the lyrics have been penned by Javed Akhtar.

Movie all set to release on August 12th along with Akshay Kumar starrer Rustom.