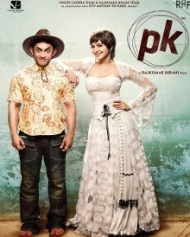 PK (PeeKay) movie is a political satire, hitting out at corruption in the country. Director Rajkumar Hirani  has stated that the film will be a satire on "God and godmen"

Plotline
An alien (Aamir Khan) gets stranded on earth with nothing including clothes except a locket which was his remote to call the spaceship to go to his planet back. But, in a short time, the locket is looted from the alien. He tries to get it back but is unsuccessful. He comes to a land quite different from his home place where he slowly understands the use of money and clothes.

Once, when he was running for his life, he gets hit by the vehicle of Bhairon Singh (Sanjay Dutt) who thinks that the alien has lost his memory and is unable to recognize anyone. He takes the alien to his place and helps him try to adjust to Earth customs. He doesn't understand the language on Earth and in order to do so, he tries to transfer it from women's hands. Bhairon thinks that the alien is attracted towards women, so, he takes him to a night club where he was free to hold hands. After 6 hours of transferring, he gets to know their language from a girl, Phuljhadiya (Reema Debnath).

After being able to speak, PK tells his friend Bhairon that someone stole his locket. So, Bhairon tells him that the robber won't sell the locket at that place to avoid getting caught and may have gone to Delhi. So, PK goes to Delhi and tries to inquire about his locket where he gets to listen phrases such as - "Only God can help you" from everywhere. So, he sets out to find God and ends up in a series of confusions as to find God of which religion. Meanwhile, everyone thinks that he is drunk and because of this gets the name 'PK'.

On a day, a TV reporter Jagat Janani (Anushka Sharma), better known as Jaggu, finds strange when she comes across PK as he was distributing posters for 'Missing God'. She follows him and end up saving him from being beaten up when he was stealing money from a temple. She inquires about everything and broadcast it on her channel. Jaggu tries to help PK find his locket to go back to his planet. His locket was with a Godman Tapasvi Maharaj (Saurabh Shukla). Jaggu and PK set out to get the locket in a series of drama and claim that Tapasvi Maharaj was calling the 'Wrong Number' and not really God.

Meanwhile, PK falls in love with Jaggu but comes to know that she loved Sarfaraz (Sushant Singh Rajput) whom she was to marry but abandoned the idea following a misunderstanding. Meanwhile, Bhairon Singh catches the robber and reached Delhi with him but both died in a bomb blast. PK and Tapasvi Maharaj clash with each other during a TV Show on Jaggu's news channel. With the help of Jaggu's boss, he proves that Sarfaraz was not wrong for which in turn he got his locket.