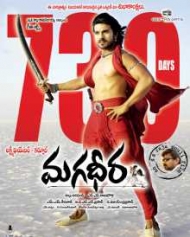 Magadheera is set in the backdrop of divine mysteries of death and reincarnation, The story happens in the year 1609. Kala Bhairava (Ram Charan Teja) is the protector/cheif guard of Udayghad kingdom.

Mitra (Kajal Agarwal), the heir princess is in love with him. But there is a bad relative of the king who wants to marry her. Sher Khan (Srihari) plans to invade Udayghad. In the process ensued, all of them die. These four people take rebirth after 400 years in the contemporary era. Harsha (Ram Charan Teja) is a race biker. He falls in love with Indu (Kajal Agarwal). And a bad guy called Raghuveer is after her.

The rest of the story is all about whether they get each other in this present.