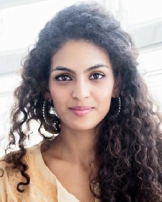 Rukmini Vijayakumar, pet name " Rukku", is an accomplished Bharatanatyam Dancer. She has performed at many stages in India & USA.

She is also an upcoming actor and model . She acted in a trilingual movie, made by Bharathi Raja, in Tamil (Bommalattam), Telugu (Rana ) and Hindi (Cinema).

Rukku is also an exponent of Western Classical Ballet and graduated from Boston Conservatory.

Rukku practices Hatha Yoga, as per the B.K.S. Iyengar School.

She has starred in many modeling and advertisement campaigns and have signed for more modeling deals presently.

"In all walks of life, particularly in the realm of art, the human spirit yearns for perfection." Rukmini Vijayakumar, an epitome of this perspective, has raised the bar for performing artists worldwide.

Rukmini’s artistic pursuits began with dance. She was initiated into dance with the study of Bharatanatyam and Ballet 18 years ago. She began learning Bharatanatyam under Guru Padmini Rao, a teacher of the Tanjore tradition of Bharatanatyam and later continued under late Guru Smt Narmada, a recipient of the Sangeeth Natak Academy Award. She continues her rigorous practice of the art and performs widely. As a Bharatanatyam soloist, Rukmini has danced in several National dance events, which include the Festival at Khajuraho, the Kalidas Samaroha in Ujjain, the Natyanjali in Chidambaram and many more.

What sets Rukmini apart, is not only her dedication to delve deep but also her breadth of knowledge.  Versatile, she is proficient in more than one dance form.

She graduated from one of the most eminent performing Arts schools in the USA, the Boston Conservatory after a rigorous four years, with Bachelors of Fine Arts in dance, (Modern and Ballet) becoming the first Indian to graduate with a Dance degree from The Boston Conservatory. She has studied Laban movement analysis, Alexander technique and Pilates extensively.

Rukmini has learnt extensive yoga and continues a serious practice. She is a certified Pilates instructor of the Power Pilates institute. She studied Human Anatomy and Exercise physiology at the Boston University and is pursuing a Fitness Instruction certification at UCLA.

Rukmini began acting in the Theaters of Bangalore, she contined her study at the Bston conservatory and later acquired Certificate in acting at the Film Academy in LA. She debuted in a Tamil movie “Bommalattam’, with renowned Actors Nana Patekar and Arjun Sarja, directed by Bharathi Raja. She is currently working on several other acting assignments in India.