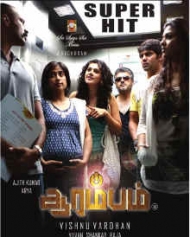 Arrambam is a tamil action movie directed by Vishnuvardhan. The film will feature Ajith Kumar, Arya, Nayantara and Taapsee Pannu playing lead roles. Movie is Produced by A. M. Rathnam.
Story Line
The movie opens up with Mumbai witnessing a series of bomb explosions. AK alias Ashok Kumar (Ajith) is the man behind it. Soon he kidnaps Arya, a hacker, and includes him in his larger plan. A flashback is revealed, where we are told about Maya (Nayantara), Anitha (Taapsee Pannu), who is the girlfriend of Arya and an aspiring TV journalist.
Ajith threatens to kill Anitha in order to make Arya to work for him. They successfully hack and bring down the server of a media company. Honest cop played by Kishore catches them and another flashback takes us to Ajith Kumar's past life in ATS (Anti Terrorist Squad) along with Sanjay (Rana Daggubati).
In the second half, we get a clear picture about the revenge drama. What is the motivate behind the bomb explosion? Does Ajith have a terrorist connection? Why does he target a media company? What role Nayantara has played? What next is a racy climax.
Production
A teaser released without the title and became a popular video on YouTube. Vishnuvardhan said that Ajith Kumar will have a "salt and pepper" look, and that Ajith Kumar underwent supervised weight-training.
The first schedule of filming began on 2 June 2012 with portions involving Ajith Kumar, Nayantara and Arya. The filming was expected to proceed until the end of the month in Mumbai, but later cancelled due to monsoon and location was shifted to Bangalore and later in Hyderabad. On 7 September, during the second schedule, Taapsee Pannu joined the crew and began shooting her portions.
During the next schedule that started on 2 November 2012, filming was held in Mumbai and its suburban locations. While shooting an action sequence, Ajith Kumar was injured, suffering an ligament tear. Despite his injuries, Ajith Kumar continued shooting.
Ajith filmed a boat sequence for the film in an Arab country, which was choreographed by Hollywood stuntman Lee Whittaker. After finishing the boat scene, director tweeted, "Finished amazing boat sequence here in Dubai! Ajith was absolutely amazing! Couldn't have done it without his skills!".
Finally the shoot finished at Kulu Malali.
Buzz On Arrambam
The footage of the movie has been leaked. The video has gone viral on YouTube. In the video, Ajith Kumar will be seen hanged upside down and getting tortured in police custody.
Earlier, the video of Ajith Kumar getting injured on the sets of Arrambam had gone viral. He met with the accident while he performed an action sequence. Meanwhile, the crew has not confirmed anything about the video.
Release Date
Finally the producer A M Rathnam announces that Arrabmam will be releasing two days before Diwali Oct 31st and Audio released on September 19th.