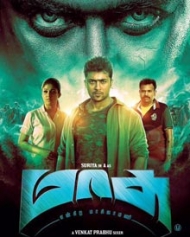 Masss(Mass) (aka) Massu Engira Masilamani is a Tamil Horror - Comedy movie direction by Venkat Prabhu. The movie starring with Surya and Nayantara, Amy Jackson and Premgi in lead roles. Music by Yuvan Shankar Raja and Editing done by Praveen, this film is a 50th movie for Editor Praveen.
Story
Surya as Masss alias Maasilamani and Shakti. As Mass, he speaks local Tamil and as Shakti he speaks Ceylon Tamil. In both the role Surya scores, he delivers a neat performance.
Nayantara and Praneetha as heroines. Nayan has very less romantic scenes with Suriya. Vidyulekha Raman as Nayan’s friend, plays a bubbly character.
Premji Amaran as usual hero Suriya's friend. Prathiban as a cool cop, through the movie he travels with his witty dialogues.
Suriya gets the ability to see the ghosts after a car accident. The movie story shows how he meets different ghosts and helps them to fulfill their last wish. Interestingly, he met another Suriya who is a ghost, how they both are related to each other and How they both gets relates to the main villain Samuthirakani? Watch out in main screens.
View Interesting photos from Surya's Mass
Read User Review For Masss
Masss Teaser Reached 1 Million
Masss teaser was released at midnight 1 am on the 25th of April and it crossed 1 million views in its 2nd day on youtube. Masss teaser starts with Suriya evergreen punch dialogue from Singam movie "ethir pakalala, naa thirumba varuvanu, athum ippadi varuvenu", then Thala Ajith's high pitch dialogue from Mankatha "Now It's my fu**ing game".
Eros International has announced its association with Studio Green for the worldwide rights.
Nayantara was roped in to play one of the female leads, along with Amy Jackson, while the director's brother Premgi Amaren was given a significant supporting role as in all of Prabhu's films.
Mohan was reported to be playing the villain, but the director confirmed that Mohan was not approached for any role in the film. Actor-director R. Parthiepan informed that he had "a special character to essay in Masss, a very significant one". Jayaram, who had worked with Venkat Prabhu in Saroja (2008), was added to the cast and reported to be playing a prominent role.
Actors Sriman, Karunas and Daniel Annie Pope of Idharkuthane Aasaipattai Balakumara (2013) fame were reported to be essaying the roles of spirits in the film. On 10 August 2014, actress Vidyullekha Raman informed that she would be a part of the project. The next day, actor-director Samuthirakani was confirmed to be part of the project.
The movie officially got wrapped on April 19th, 2015. The movie scheduled to release on May 29.