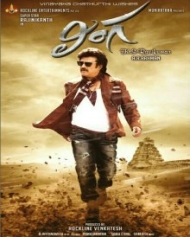 The story starts up with a flash back where in Raja Lingeshwaran (Rajinikanth) is a rightful heir to a famous dynasty that once ruled most parts of Southern India. Natives of that village follow whatever Raja Lingeshwaram says. Because of his urge to help the poor, his nobility makes him gain that priceless love of those villagers.

Raja Lingeshwaran takes up the initiative and requests the Britishers to build a much needed dam that would serve well for the people. But his idea is opposed citing a political reason and hence he leads from the front and...