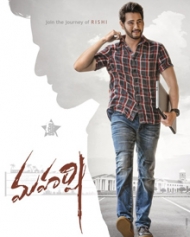 Maharshi movie is a romantic stylish action entertainer directed by Vamshi Paidipally and jointly produced by Dil Raju and C Ashwini Dutt while Devi Sri Prasad scored music for this movie. Mahesh Babu and Pooja Hegde are playing the main lead roles along with Allari Naresh and many others are seen in supporting roles in this movie.

The story of Maharshi revolves around a character named Rishi. The film is basically the journey of Rishi as a college student, an CEO and a farmer