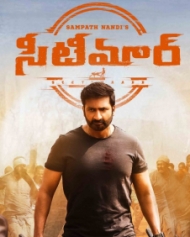 Seetimaarr is a romantic action entertainer movie directed by Sampath Nandi and produced by Srinivasaa Chhitturi. The movie cast includes Gopichand, Tamannaah Bhatia, Digangana Suryavanshi and Bhumika Chawla are in the lead roles while Mani Sharma scored music.
Story
Karthik (Gopichand) is a kabaddi player from Atreyapuram in East Godavari district. He got a job as a bank assistant manager in Sports Quota and is working in his hometown. His father dies when he is young and he lives with his mother (Pragathy) and elder sister Bhumi (Bhumika Chawla). He also serves as a kabaddi coach for school children that school was built by his father by selling all his assets.
The school's existence is in danger of being recaptured, which means that there is a chance of winning the Nationals through the game of Kabaddi. While going to Delhi for the National Kabaddi competitions, the team is kidnapped under unforeseen circumstances. Did the kidnapped team play kabaddi again? Who actually kidnapped this team? Will Karthik regained his lost school? That is the story of this film.
Why would actualy school fell in problems? What is the problem of Karthik (Gopichand) with Kadium Brother (Rao Ramesh) in the village? How does Jwala Reddy exceptionally help Karthik? Why does Karthik get into a fight with Makhan Singh (Tarun Arora) and Arvind (Rehman)? What were the consequences of Karthik entering into their problems? This Seetimaarr story is the answer to these questions.
Release Date
Seetimaarr movie released in theaters on September 10, 2021 on the eve of Ganesha Chaturthi.