Sunny Leone looked stunning in a black gown while attending the launch of a website. Sanya Malhotra was at a promotional event of her upcoming film Photograph and she posed for cameras there. Tamannah Bhatia was snapped in Bandra on Tuesday afternoon. Huma Qureshi also got papped when she was out in the city. Kartik Aaryan looked cool when he was snapped on Tuesday evening. Check out all their pictures!

Sunny In A Stunning Black Gown At An Event

Sunny Leone was donning a stunning black one shoulder gown when she attended the launch of a website on Tuesday afternoon.

Sanya Malhotra was promoting her upcoming film Photograph on Tuesday and she posed for the shutterbugs at the event. Sanya was sporting a casual look in a black top teamed with high rise ripped denims, with her hair done up in a bun. Sanya will be starring opposite Nawazuddin Siddiqui in Photograph, which is set to release on March 15th.

Tamannah Snapped In The City

Tamannah Bhatia was snapped in Bandra, Mumbai on Tuesday afternoon. She waved for the cameras, sporting a casual look in a yellow hoodie, and a black skirt. She carried a black hand bag and sported a pair of silver sneakers to go with her outfit.

Huma Qureshi was all smiles when she got papped out in the city on Tuesday evening. Huma was wearing a white checkered top with high rise black denims and a pair of black sneakers when she was snapped. On the work front, she is all geared up for the release of her Netflix original series, Leila, which will launch on June 14th of this year.

Kartik Aaryan was sporting an all denim look when he got snapped by the paparazzi on Tuesday evening. Kartik was wearing a light blue shirt with a denim jacket, and ripped jeans. He opted for a pair of white sneakers to complete his look. Kartik's last film, Luka Chuppi, starring opposite Kriti Sanon, has had a decent run at the box office so far. Kartik is currently shooting for the sequel of Love Aaj Kal, along with Sara Ali Khan. 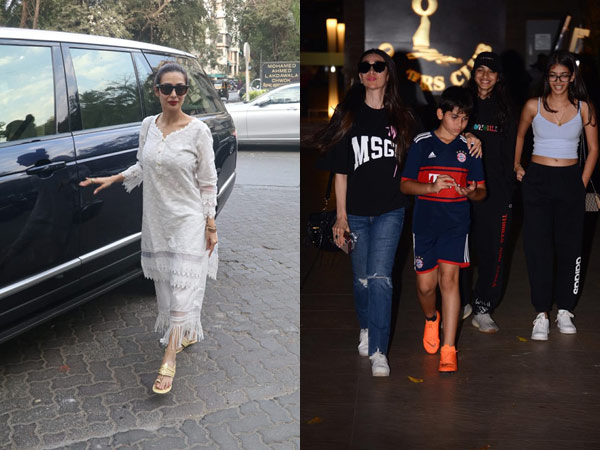